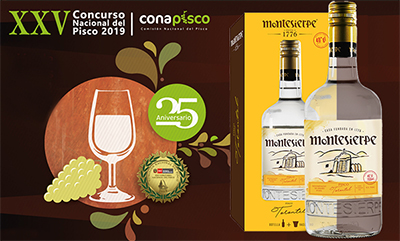 The XXV National Pisco Contest was recently held, as well as the competitions of the pisco producing regions. This event was held on November 13, 14 and 15, 2019 at the Hilton hotel in Paracas, in Pisco, under the strict rules for contests established by the OIV (International Wine and Vine Organization), sponsor of the contest.

It is noteworthy that the OIV sent a representative to supervise the correct development of the contest, which reflects the seriousness and responsibility with which Conapisco assumed the organization of the contest.

Equally worth mentioning is the participation of more than 50 official tasters and applicants registered with Conapisco and invited by this organization to carry out the sensory evaluation of the participating distillates, the same ones that had previously been subjected to the corresponding physical-chemical analysis. The judges summoned belong to the different recognized associations of pisco tasters, such as Ancopisco and Aspercat, and have proven ability and experience in tasting pisco.

Within this framework, we are pleased to note that the pure Montesierpe pisco made from Torontel grapes was awarded the gold medal in the Lima Regional Contest, which undoubtedly rewards the hard work that Bodega Viña Vieja has been developing to improve its year after year. products and return to the Montesierpe brand the prestige and position it deserves to occupy in the market.

Receive our news, as well as special promotions, directly to your email.